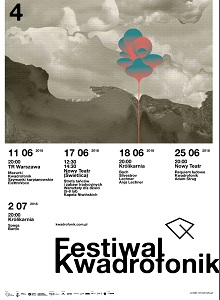 The common motto of all concerts and events taking place during the 4th Kwadrofonik Festival is tradition (Latin traditio – delivery, surrender, handing down) in its broad sense. The event will take place between June 11 – July 2, 2018 in Warsaw.

The invited guests, featuring Agata Zubel and Cezary Duchnowski (ElettroVoce Duo) and members of Kwadrofonik (Emilia Sitarz, Magdalena Kordylasińska-Pękala, Bartek Wąsik and Miłosz Pękala), treat it as a point of departure for expressing themselves, their principles, mindset and perception. On the one hand, they stay faithful to what belongs to the past, but at the same time use the language of their peers. For years they have been seeking new contexts for human voice and sound possibilities of traditional instruments. Projects of both ensembles – Szymanki kurpianowskie and Mazurki inspired by Karol Szymanowski will be performed during the opening, joint concert.

Another artists to perform at the Festival is Anja Lechner – a distinguished German cellist, who treats traditional music as source of abundance and inspiration. In her projects released on more than 20 albums by the renowned ECM Records, she frequently combines distant cultures and music genres. Her festival recital will bridge the modern and centuries-long solo cello performance. We will hear Johan Sebastian Bach and Friedrich Abel next to pieces by Anja Lechner and Valentyn Sylvestrov.

The Festival programme includes Folk Requiem composed by the Kwadrofonik and Adam Strug. The latter one – an unquestioned master of the traditional song, puts himself in the hands of timbre and space-seekers, creators of a whole new quality in folk music. In the Requiem the 18th century texts and funeral tunes encounter modern instrumentation and contemporary performance techniques, thus creating both terrifying and enchantingly beautiful vision of a man’s last journey.

The project by Bardo duo (Barbara Kinga Majewska and Bartek Wąsik) – Songs – is a tribute to the song, which enjoyed its heyday in the Romantic era. It is then that the piano began to accompany human voice. The Bardo carries the old, traditional formula into modernity, relying on simplicity, intimacy, classic sound, discreetly highlighted by electronics. As a duo they move beyond categories and genres, staying faithful to themselves.

Kapela Niwińskich are initiators and participants of various activities aimed at reviving local music tradition, searching for indigenous sound of rural music. Especially for the Festival’s young audience, they have prepared music workshops based on old play schemes, typical for children, youth and adults of the Mazovian villages and small towns. The games will be accompanied by violins, basolias and frame drums – instruments characteristic for old, Mazovian bands.

Admission to all the events is free.