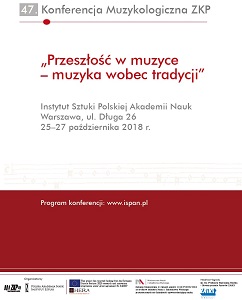 On October 25-27, 2018, at the Art Institute of the Polish Academy of Sciences in Warsaw (26 Długa Street) will host the 47th Musicological Conference of the Polish Composers' Union "The Past in Music - Music towards Tradition".

The year 2018 is also the 70th anniversary of the Section of Musicologists of the Polish Composers' Union, therefore all of you are cordially invited to take part in the conference. The first panel session will be devoted to the history and present, and will feature Katarzyna Dadak-Kozicka, long-term chairwoman of the Musicologists Section, the author of the book Obrońcy dobra powierzonego, which talks about the beginnings of the ZKP and the Musicologists Section; Iwona Lindstedt, editor-in-chief of "Polish Musicological Yearbook," and Sławomir Żerańska-Kominek, editor-in-chief of "Musicology Today". The conference participants' lectures will also be devoted to issues in the history of music as well as etnomusicology, anthropology and sociology of music, incorporated in two complementary thematic areas, announced with the title of conference. The first one concerns various forms of the presence of music of the past in the culture of a given period, the second – the relation of music to a tradition identified with a given musical genre, a center, a region or a social group.

The conference is being prepared by the Program Committee composed of Agnieszka Draus, Paweł Gancarczyk, Barbara Przybyszewska-Jarmińska and the chairwoman of the SM ZKP Beata Bolesławska-Lewandowska. The conference is organized in cooperation with the international research project HERA "Sound Memories: The Musical Past in Late-Medieval and Early Modern Europe" (www.soundme.eu). The project is financed under contract 1013 / P-DUN / 2018 from the funds of the Minister of Science and Higher Education designated for dissemination of science.

Admission to the conference is free.