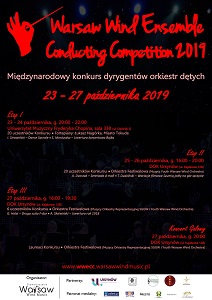 The Warsaw Wind Ensemble Conducting Competition 2019 is the first edition of the international competition for wind orchestra conductors, which will be held in Warsaw on 23-27 October 2019.

The competition will consist of three stages and 20 conductors from 11 countries will compete. Participants will be judged by a jury chaired by Prof. Szymon Kawalla, PhD, Dean of the Faculty of Composition, Conducting and Music Theory at the Fryderyk Chopin University of Music in Warsaw.

The first stage will take place from 23 to 24 October (8:00–10:00 p.m.) at the Fryderyk Chopin University of Music (auditorium 338). The conductors will be accompanied by two pianists, and the performance will include Dance Sacrale from the ballet The Rite of Spring by Igor Stravinsky and the Bajka Concert Overture by Stanisław Moniuszko. The next stages of the competition will take place in the District Cultural Centre Ursynów. The second stage will be held from 25 to 26 October (4:00–10:00 p.m.). Conductors will lead the Festival Orchestra consisting of musicians from Youth Warsaw Wind Orchestra. The repertoire will include two pieces: Serenade in D minor for wind instruments by Antoni Dvorzak and Film Variations on the theme of the aria “Szumią jodły na szczycie” by Stanisław Moniuszko by Tomasz Dudziński.

On 25 and 26 October, after the competition auditions (8:00 and 9:00 p.m.) there will also be lectures given by pedagogues, composers and musicians (the speakers will be pedagogue and composer Ignacy Zalewski, composer Paweł Pudło, trumpeter musician Bartłomiej Łubian and composer Artur Słotwiński).

The final of the competition will take place on Sunday, 27 October (4:00–7:30 p.m.), during which the 6 best conductors will lead a much larger Festival Orchestra consisting of musicians from the Warsaw University of Life Sciences Representative Orchestra and Youth Warsaw Wind Orchestra. In the repertoire of the finale, Second Suite in F major for military orchestra by Gustav Holst and Overture Year 1918 by Artur Słotwiński. The culmination will be the Gala Concert, which will take place at the end of the Competition, on 27 October at 8:00 p.m. in District Cultural Centre Ursynów. The winners of the Competition will be announced during the concert. The best conductors will receive prizes and conduct the Festival Orchestra, which will perform works from the competition repertoire.

All events are free and all auditions are open to the public.