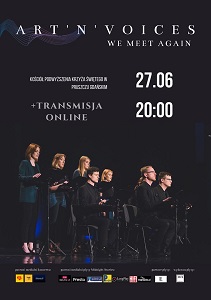 The Association of Young Artists of the Wejherowo Land invites you to the first concert of the vocal group Art’n’Voices after the quarantine, which will take place on 27 June 2020 at 8.00 p.m. in the Church of the Exaltation of the Holy Cross in Pruszcz Gdański and will be streamed online.

The concert programme will include music from the latest Art'n’Voices album entitled Midnight Stories and other songs from their repertoire.

Midnight Stories is an album dedicated entirely to songs inspired by the theme of the night, composed by Paweł Łukaszewski, Krzysztof Komeda, as well as the atists of the young generation – Szymon Godziemba-Trytek, Zuzanna Falkowska, Anna Rocławska-Musiałczyk and Jakub Szafrański. The album was recorded at Ars Sonora Studio and was published by DUX. The premiere performance took place at the Stanisław Moniuszko Academy of Music in Gdansk at the end of February 2020 and started the promotional concert series. After a four-month break, the ensemble resumes concerts and invites you to one of the oldest churches in Pomerania – the Church of the Exaltation of the Holy Cross in Pruszcz Gdański.

Admission to the concert is free, but the number of places is limited.