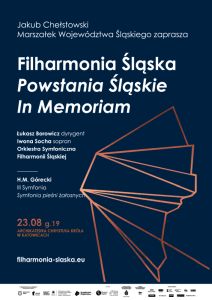 On 23 August 2020 Marshal of the Silesian Voivodeship Jakub Chełstowski invites you to the Cathedral of Christ the King in Katowice to contemplate the music of the Patron of the Silesian Philharmonic. The concert will commemorate the 100th anniversary of the end of the Second Silesian Uprising, which falls on 25 August 2020.

The evening will present one of the most famous works from the second half of the 20th century – Symphony No. 3, Symphony of Sorrowful Songs, Op. 36 by Henryk Mikołaj Górecki. The enormity of emotions, expressed both in the music and text of Górecki's Symphony, will fill the walls of the Katowice temple. The Symphony Orchestra of the Silesian Philharmonic will be conducted by Łukasz Borowicz – the winner of the "Polityka's" Passport, the Corypheus of Polish Music award, the Cyprian Kamil Norwid award and the Tansman award for "outstanding musical personality". The solo part will be performed by soprano Iwona Socha, soloist of the Krakow Opera who cooperates with leading opera and operetta houses in the country, performing in Poland and abroad.

The August concert will be an extremely significant event for Silesia. The celebration of the 100th anniversary of the end of the Second Silesian Uprising will be graced by the music of Henryk Mikołaj Górecki, one of the most important Polish composers of the 20th century who was a Silesian. It will be performed by the Silesian Philharmonic, for which the heritage of the region is particularly important and its promotion is one of the main goals of the institution. Thanks to live streaming, everyone will be able to listen to the concert – not only in the Cathedral, but also at home.