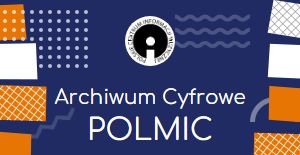 The Polish Composers' Union launches new websites: "POLMIC Digital Archive" and the portal dedicated to "Roman Maciejewski". The presentation of both sites (open to public) will take place on the Zoom platform on Thursday, 28 January 2021 at 2 p.m.

The PCU's Music Library collection of recordings, photographs, scores and documents will be published at www.archiwumcyfrowe.polmic.pl. A significant part of the collection is related to the "Warsaw Autumn" International Festival of Contemporary Music, organised since 1956 by the Polish Composers' Union. The portal will also feature scores, many of which have not yet been published, publications related to the festivals, concerts and other events organised by the PCU, as well as articles on contemporary music. We will also make available extremely interesting archival documents concerning the functioning of the PCU in the political reality of the People's Republic of Poland. All spheres of life were permeated by politics at that time, the best example of which was the famous Conference of Composers and Music Critics in Łagów Lubulski.

The series of monographic websites devoted to Polish contemporary composers is also growing. At www.maciejewski.polmic.pl you can find a detailed biography of Roman Maciejewski (1910–1998) presented in an attractive audio-visual form with many illustrations and a comprehensive presentation of his work with sample recordings. Roman Maciejewski spread his musical wings in the interwar period, gaining the recognition of such authorities as Karol Szymanowski, and after emigration, due to the political situation in the world and his own philosophy of life, he gradually disappeared from the consciousness of music lovers. Thus, Maciejewski became part of a larger phenomenon – a "piece" of a puzzle composed of a whole generation of intellectuals and artists, often outstanding, yet forgotten. A generation that musicologist Tadeusz Kaczyński called with the term "lost generation". Fortunately, from around 1989, the work of émigré composers gradually began to be included in the general history of Polish music, which also contributed to the growing interest in Maciejewski. Currently, his works are more and more appreciated by performers, musicologists and music lovers.

The projects were co-financed by the Minister of Culture and National Heritage from the Culture Promotion Fund as part of the "Digital Culture" programme.