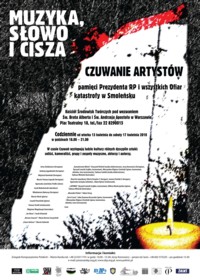 Report on the Music Market in Poland 2008

We encourage you to get acquainted with the report on the music market in Poland, prepared by Aleksandra Jagiełło-Skupińska. The report concentrates on the music record industry, with particular emphasis on classical music. It contains data related to digital music online, the download of music files to mobile phones, radio and television broadcasters, copyright organizations, music life and score publishers.

„The Polish music market is of little significance to the world or European markets. In comparison with leading world markets, such as the USA, Japan, the UK, Germany or France, the value of the Polish market is small. In the World Ranking run by the International Federation of the Phonographic Industry (IFPI), Poland is 24th with regard to physical sales value, 36th as far as digital sales are concerned, and 28th with respect to performance rights. (…)

The Polish music record market is dominated by four main music corporations (majors), whose combined share in the market totals approximately 75%. These are: Universal Music Poland, EMI Music Poland, Sony BMG Music Entertainment and Warner Music Poland. In this respect, the Polish market mirrors the world music market. The competitors of these corporations are several hundred small local record labels with limited budget for promotion and small catalogues of performers. Many of these small labels do not possess their own system of distribution, and are therefore dependent on distribution by the majors, which allows the latter to take control over the distribution of many independent labels. Only a few of the Polish record companies can boast markets shares exceeding 1%. It is a characteristic feature of the Polish market that record sales are increasing, which is contrary to the global trend. Worldwide, record sales are continually falling, while digital music sales are rising. (…)

Classical music recordings constitute 10% of the total value of all recordings sold in Poland. In comparison with the general situation on the Polish record market, the classical music sales are less concentrated. For the majors, it is the weakest segment of the market. Despite the domination of the market by the majors, local producers in the classical segment offer strong competition, unlike in the popular Polish and foreign music segment, or in the market for medleys and soundtracks. (…)

In recent years, the digital music market in Poland has gradually gained more importance, but this growth is very slow in comparison with Western European markets and the USA. This difference results, on the one hand, from less universal access to the Internet, particularly – broadband, and, on the other, by a high level of Internet piracy. (…)

Polish classical music is extremely poorly represented online. The opportunities created by the Internet are used by classical music authors and performers only to a very small extent. In the above listed Internet shops, one can buy Polish classical music, less commonly – contemporary works, but a successful search for a specific composition to purchase as a music file is virtually impossible. (…)

Downloading music to mobile telephones is definitely on the increase. This refers to TrueTones / RealTones, or, in other words, music and ringtones in mp3, WMA and other formats (while the download of mono- and polyphonic ringtones is systematically falling). The market share of sales in these categories has soared in the last two years. According to research conducted by Telecom Media on a representative sample of 32 thousand persons, women download more music than men (57%), and most music is downloaded by persons aged 20-30 (49%), with secondary education (63%), living in the country (34%). Most classical music is downloaded by consumers aged 30 to 40 (36%), with tertiary education (50%). ”

More: Report on the Music Market in Poland 2008 - PDF file 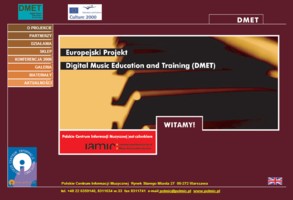 The Polish Music Information Centre organises the first RE:NEW MUSIC workshop and open rehearsal  in Poland. The workshop will take place on Thursday, 17th September 2009, at 2 pm in the State Music Schools No. 1 in Warsaw (22d, Miodowa St., 'Mala Miodowa'). It will be open to the public and free of charge.

The workshop, conducted by Gilles Gobert, is entitled Some thoughts about contemporary notation, especially in electronic music and it will “combine” theory with practice. The composer’s lecture about new notation - when and why he uses it in his works, what its possibilities and what the limitations of the conventional notation are – will be combined with a presentation of the modes of performing chosen "signs" and an invitation to the realisation of selected fragments of scores by learners. The workshop is addressed to young composers and performers.

The open rehearsal of the Pièce pour piano, percussions et électronique (the composition selected from the RE:NEW MUSIC by KWARTLUDIUM+) will be held by the composer on Friday, 18th September 2009, at 9 am in the Chamber Music Hall of Warsaw Philharmonic. 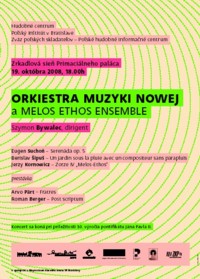